WONTON IN HOI AN

Hoi An wonton is one of local specialty. Hoi An wonton comes from China but has been adapted by the inhabitants to suit the local taste. Similar to ravioli, wonton is made with rice flour and filled with ingredients such as shrimp, pork, egg, and spices. There are many kinds of wonton dishes: fried wonton, wonton soup or wonton and noodle soup are a few examples.

Hoi An fried wonton is covered in a salsa-like topping of vegetables and sweet and sour shrimp are crispy, mouth-watering works of art. How to cook Hoi An wonton:

You can check video for how to cook hoi an wonton

To make the dish, makers need to be skillful. Fresh shrimp will be peeled off covers, then grinded and mixed with husked pork and sliced onion as well as spices for about 30 minutes. The next move is to spread wonton, put the mixture of shrimp, pork and spices on it and wrap them. And makers then just cook them in oil.

People often added fried tomatoes and coriander on the fried wonton dumplings to make it more good-looking and tasty.

The last phase is making the sauce. Eaters can enjoy it with chili sauce mixed with soya sauce and vinegar. Salad and mayonnaise are also needed to feast diners’ tongues. 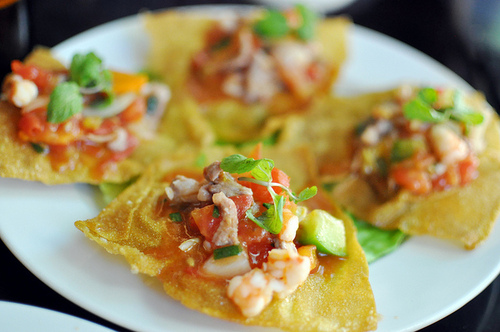