As a traveller, many people wonder about the Differences in Vietnamese Regional Cuisine . As one of the tropical countries with warm, humid, monsoon climate, Vietnam create a distinct and unique culinary system. For Vietnamese people, cuisine shows culture, tradition and spirit so that each meal features a combination of five fundamental taste elements: wood, fire, earth, metal, water. The similar point of Vietnamese cuisine stretching along an S-shaped land is the harmonious mix of tropical spices, following the principle of yin and yang. Nevertheless, while sharing some key features, Vietnamese culinary tradition differs from region to region, from North to South, created the Differences in Vietnamese Regional Cuisine , depending on the differences in geographical, climic and cultural features. In northern Vietnam, a colder climate limits the production and availability of spices. As a result, the foods there are often less spicy than those in other regions. There is less sugar and a whole lot fewer chillies in northern Vietnamese fare. Because of the north’s cooler climate, herbs and spices are not used as frequently as in the cookery of southern Vietnam. Black pepper is used in place of chilis as the most popular ingredient to produce spicy flavors. In general, northern Vietnamese cuisine is not bold in any particular taste — sweet, salty, spicy, bitter, or sour. Most northern Vietnamese foods feature light and balanced flavors that result from subtle combinations of many different flavoring ingredients.
In addition, based on long-standing cultural traditions and personality of the northern people, food is also slightly subtle classical ritual. With the strict traditional principle, Northerners also bring perfectionism and stylish in their own dishes. Food are processed according to complex formulas, with adequate ingredients and spices, eye-catching and sophisticated presentation.
Being the cradle of Vietnamese civilization, northern Vietnam produces many signature dishes, such as Phở, Bún riêu, Bún chả and bánh cuốn…

Differ from Northern people, the central habitants are gruff but outspoken, straightforward due to severe weather. Thus, central cuisine is notable for its bold and attraction, which sets it apart from austerity and complex dishes in the North.
Central Vietnam also boasts the country’s most complex and flavorful cuisine. The food is spicier with less Chinese influence than the north, while still retaining some of the French flavors and techniques that are popular towards the south of the country.

The region’s cuisine is also notable for its sophisticated meals consisting of many complex dishes served in small portions. Chili peppers and shrimp sauces are among the frequently used ingredients. 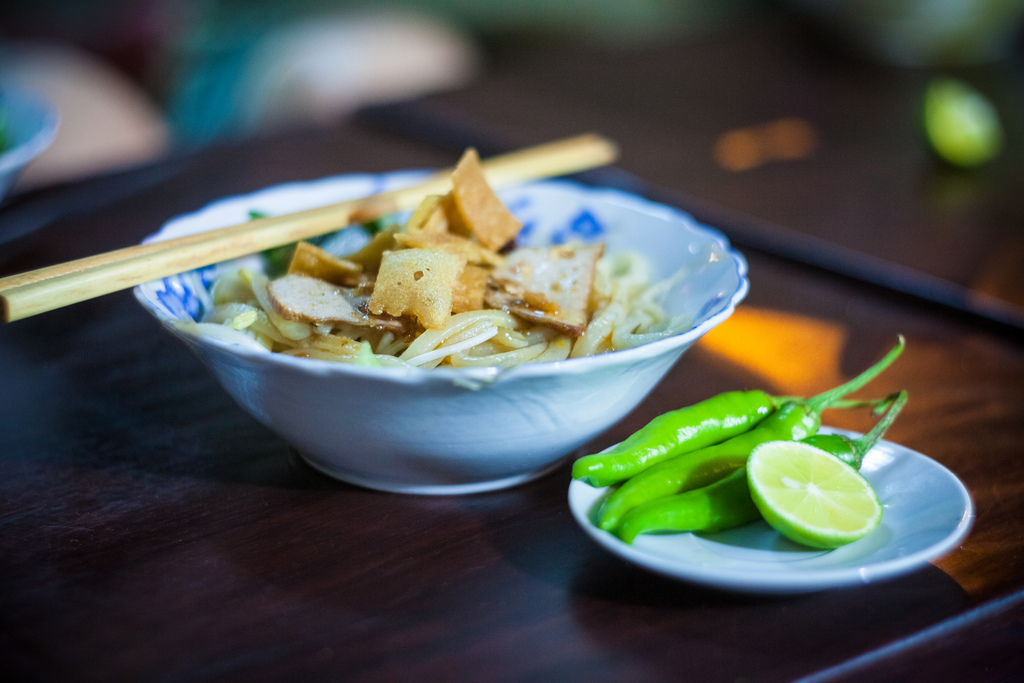 Coming to the centre of Vietnam, it’s regrettable to not try Tam Ky chicken rice or Cao Lau in Hoi An, Quang noodle in Da Nang and mussel dishes as well. Once time putting footprint in this harsh land, let’s stop a little to enjoy the warmth of its people throughout their homeland tasty dishes.

The warm weather and fertile soil of southern Vietnam create an ideal condition for growing a wide variety of fruits, vegetables, and livestock. As a result, foods in southern Vietnam are often vibrant and flavorful, with liberal uses of garlic, shallots, and fresh herbs. Sugar is added to food more than in this region, likes the sweetness and friendliness of Southern people. The preference for sweetness can also be seen through the widespread use of coconut milk in southern Vietnamese dishes. Despite a few of Differences in Vietnamese Regional Cuisine,they still have some common features, reflected personality and culture of the Vietnamese people: warm, charming and sophisticated.