White Rose Hoi An  (banh bao banh vac) is one of Hoi An ‘s local specialty. White Rose is made by one family who makes them for all the restaurants in town!. Don’t miss white rose before you leave hoi an

How does white rose look?

White Rose (banh bao banh vac), a type of shrimp dumpling made from translucent white dough bunched up to look like a rose. The dumplings are served topped with crunchy bits of toasty garlic and served with a sweet dipping sauce. Many people like these cakes not only for their delicious flavor but also for their beautiful appearance. The French gave it the name of “white roses”. 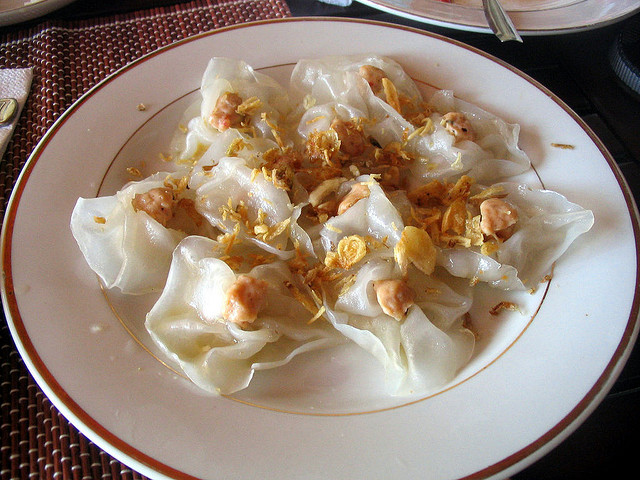 It is basically a dumpling comprising of two small 2-inch diameter rounds of rice paper, with a dime-sized lump of meat filling right in the center. When the rice paper is steamed, the edges get soft and chewy and warp a little, making the dumpling look like a white flower.

They are presented about 15 on a plate, topped with crunchy bits of toasty garlic and served with a sweet dipping sauce. When prepared well the texture is soft but slightly chewy, sweet from the sauce and crunchy/salty from the toasted garlic, savory from the shrimp meat filling. The translucence of the flour along with the color of the shrimp meat gives it the appearance of a white rose petal. 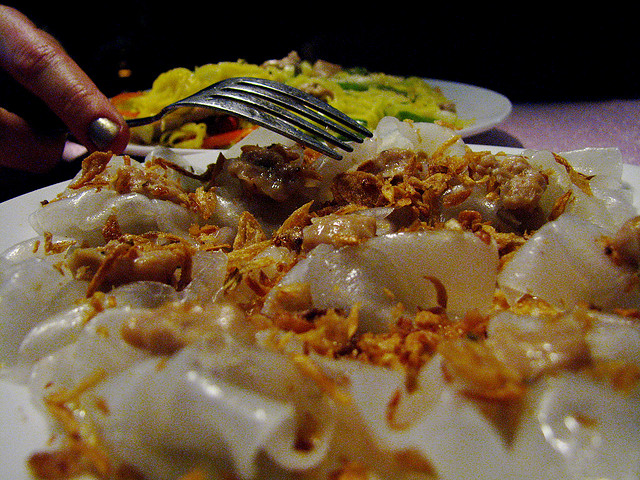 The dumplings are served topped with crunchy bits of toasty garlic and served with a sweet dipping sauce.

Why white rose Hoi an is so special?

The recipe for these dumplings is secret, held by one family in Hoi An who supplies all the restaurants. At 533 Hai Ba Trung Street, Tran Tuan Ngai is a third generation secret keeper of the traditional white rose recipe.

Ngai’s grandfather first created the light and fluffy dumplings for family dinners. They became so popular that he started selling the dumplings to his neighbors. When demand increased, he turned a part of his house into a bistro. Making the white rose is not as easy as it looks.

How to cook Hoi An white rose?

The dumplings look simple but the process of making it is not as easy as it looks. Using white rice from the Mekong Delta, cooks grind the rice. Water must be taken  from the old Ba Le well, which is filtered and purified 15-20 times before being mixed with the rice paste to form airy dough. Then the dough is kneaded and rolled thin and cut into dumpling sized circles.  The filling is made of minced peeled shrimps that are mixed with spices.places it in the center of each circle of dough, and deftly wraps it in the shape of a rose.  After being steamed for 10 or 15 minutes, White Rose is served with a sauce made of shrimp broth, a bit of chilly, lemon and sugar. The cake is fragrant, sweet and chilli hot.

The unique dipping sauce is made of shrimp broth, hot chilies, lemon and sugar. A plate of steaming white rose cost about US$4.